Some oddity just landed on my doorstep and I can not explain how it is that makes it so odd.  Not long after Su-Lee and I arrived back at Beach Town some strange man arrived at our community wanting to meet me and talk to me.  No one in our community knew him and he was immediately challenged by the Zindin Warriors.  They kept him on the outskirts and would not let him enter.  He had on strange clothing which no one recognized.  But when word got back to me on what he was wearing I knew he came from Tech City.  What was a city man doing here?  I told Zi-Yen to be on his guard and to keep this man away from me.

Zi-Yen spent many days questioning this stranger.  He said he meant no harm, and that he saw me when I came to the walls of Tech City.  He said he became instantly intrigued and wanted to know who I was, so he followed me.

After many days and many nights the stranger refused to give up.  Zi-Yen said to me that he is obviously telling the truth but had "city ignorance," only knowing of his own city and not the outside world.

Finally, Zi-Yen told the stranger who I was but he was not allowed to see me until Zi-Yen thought it was okay.  For all we knew, this stranger could be another assassin sent by the General.  So Zi-Yen stayed on him like a fly on poop.

Rumors were going around Beach Town that a city man fell in love with me upon seeing me.  I thought it was crazy because I was not dressed in any pretty manner and my hair was drab from travelling.  Plus that kind of love was impossible; it was only in the children's fairy tales I read when I was younger.  Besides, I did not want any man in my life just yet, I had responsibilities and duties to fulfill.  I had a commitment to my people, having a mate was just not one of them.  But in all actuality, I was scared.  I was scared of the past coming to haunt me.  I was scared that this man just wanted to hurt me, like how my birth mother was hurt.  I talked to Nami about my fears.  She said that if it was meant to be then I could not deny his love and affections.  Denying someone's love only makes matter worse.

Latina Rey thought that we should have a little festival for the community, a celebration of sorts and test the new guy.  She said that she would put on the moves on him to see if he was for real or fake.  I thought a festival was a good idea and so did the entire community.  Everyone wanted to celebrate their heritage while showing their customs to other people.  It was a good way for them to open their doors, to let them breath out their tensions.  Almost at once plans were being arranged and everyone fell into a festive mood since the season of spring was just around the corner.  I told Latina Rey that she was in charge since it was her idea.  She was delighted and jumped on the chance to get her leading skills in motion.

Zi-Yen and Nightwind decided that they would get tougher on the stranger, making him camp out in the sandy fields on the outskirts of our town.  They came up with a new name for him, he was now called "The Field Commander."  Zi-Yen and Nightwind made the Commander do all kinds of exercises in Timothy's yard, the one we use to play in when we were younger.  They were testing him to see if he would give up and go home.  But he didn't, that's what was so odd.  He preservered like a true champion.  Zi-Yen asked him the night before the celebration on what his intentions really were.  The Commander replied, "Well, I was looking out my window from one of the tall buildings right near the wall and there I saw your sister, just shining like a piece of gold.  So beautiful and so free.  Then I watched as the guards chased her away.  I saw a great spirit look my way and I began to imagine life with that spirit.  Then something within my gut told me to go out there.  I really had nothing to lose by leaving the city behind so I got myself exiled.  Now here I am."

"Exiled?  How?"  Asked Zi-Yen.
"I know why Tech City is riddled with Earthquakes, it's because of their Electrical Grid, they can't handle the power and it's slowly breaking the city apart.  No one knows how to fix it because no one knows about it.  I threatened to tell.."
"So you can't go back."  Replied Zi-Yen.  The Commander just shook his head "no."

"Alright, you can meet my sister.  But, what happens after that is up to her.  I can only arrange a meeting."
"That's good enough for me."  Said The Commander.  When Zi-Yen told me this I got nervous.

Nami wanted me to wear a dress again but I said, "No."
She said, "You can at least look presentable.  You do have a Matriarch's image to maintain."
I said, "So brush my hair and put some flowers in it, that will be enough.  I am a Zindin Warrior first and foremost."

Nami rolled her eyes and proceeded to brush out my hair.  I almost cried from the pain that Nami inflicted on me.  But she made it pretty with bright blue and pink flowers.

The festival kicked off and everyone enjoyed the light music, crazy games and delicious food in colorful assortments.  Some people sang in a chorus while children chased each other on the beach.  It was definitely a happy moment for everyone.  Su-Lee stayed by my side the entire time, she just did not want to let go of my leg.  Out of the corner of my eye I saw Zi-Yen with the Commander coming my way but then Latina Rey jumped right in front of him.  She smiled and chatted with the Commander to see if he would flirt with her back but he would not respond to her charms.  Instead he was constantly looking around to see if he could spot me.  This must have upset Latina Rey a little because I saw her storm off.  He spotted me as I was listening to a few older ladies chatting.  Then I noticed him staring right at me with a great big smile.  I was reluctant to smile back unsure of his motives so I glanced away.  He was then introduced by Zi-Yen as "The Field Commander," and I could not help but laugh.  Then all of a sudden he asked me, "May I have this dance?"

I looked up into his large brown eyes and saw an air of familiarity.  He was much taller than I and had very broad shoulders.  I felt my heart pound out of my chest.  Somehow this man made me feel good inside.

"I want to dance first."  Su-Lee pulled him away and made him dance with her.  I smiled as I watched him sway Su-Lee from side to side with the soft musical melodies drifting through the night.  Then my mind began to wonder on certain possibilities.... maybe some fairy tales do come true. 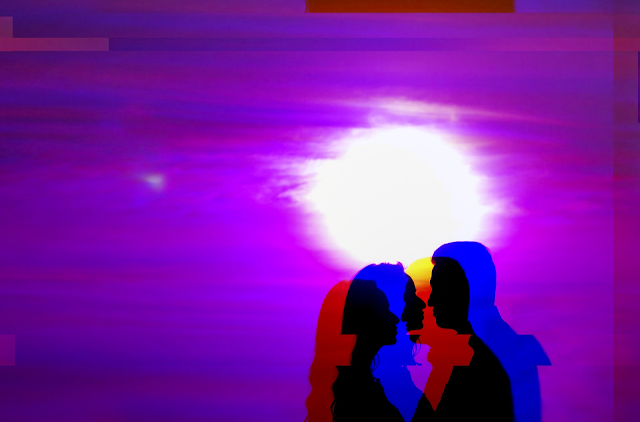