Su-Lee was excited and it was like going back in time for me.  I could see Mother Matriarch taking us kids out on a trip when we got our first motor-craft.  Then I saw my life cycling, I was now Mother and I could feel myself grow into more of an adult as I had the responsibility of another life.  It was up to me to help Su-Lee grow and I could feel myself only wanting to give her the best.  I knew that this trip would seal our bond as we became closer every step of the way.

She was a very gifted and talented child, it was easy for her to pick up on concepts and understand life.  It would only be a matter of time before she surpassed my intelligence.  Our first stop was back in the valley forest.  We set up camp and I showed her all the old places Zi-Yen and I use to train in.  Then I showed her the sacred spot.  I started to train her on the skills Zi-Yen taught me but this time I made my own game.  I would pretend I was sleeping and then I would have her sneak up on me.  Her objective was to be as quiet as possible, although she did not know how sensitive I was since I knew where she was at all times.  After a while she got the hang of it because she always wanted to practice more.

I told her, "One thing you must do, Su-Lee, is know your home turf.  That way, when something out of the ordinary comes, you know exactly what it, or who it is.  It gives you an unsettling feeling within your stomach.  You will know if something is out of place.  Next, you must know how to be very still, still like a rock or still as a tree when you have to observe that thing which is out of the ordinary.  You become aware of it but they are not aware of you.  You can easily fool your enemies this way.  But when we get back home your uncle can teach you more and you can practice with him in the sand."

After a few more nights we headed in the direction where Ivan picked me up but this time instead of being on foot I was driving my own craft.  I remembered the crumbling road and I could hear the buzz coming from Tech City's electrical grid as we were getting near.  Then it's giant deep dark grey walls appeared in the horizon before us.  The last time I saw those walls I was just a young girl.  How strange it seemed, I came from this place and yet it was foreign to me.  Stuck in some trance I kept driving right towards the wall. 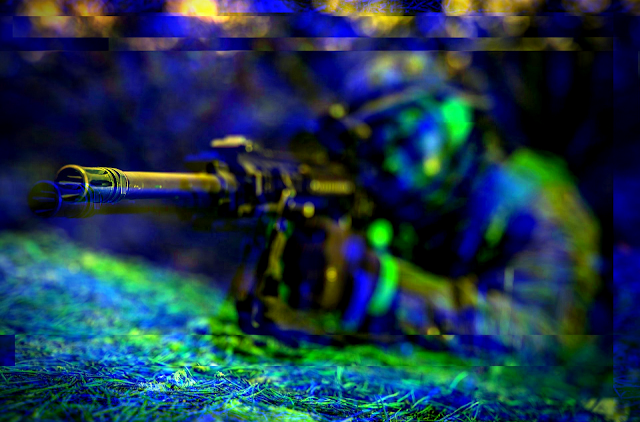 "YOU WILL MOVE YOUR VEHICLE AWAY FROM THE WALL."

It was a booming voice that echoed from behind the walls which startled me out of my trance.

I yelled out, "We mean no harm.  I just wanted to show my little girl that I came from this place."

"YOU HAVE THREE MINUTES TO MOVE YOUR VEHICLE AWAY FROM THE WALL AND GO BACK TO THE PLACE YOU CAME FROM."

Just as this second booming voice came from the wall we saw dozens of police vehicles and lights approach the perimeter with guns pointed directly at Su-Lee and I.  I did not want any trouble so I did as we were told.  I turned my vehicle around and drove in the opposite direction.  Su-Lee looked up at me with wide eyes in amazement, "That's where you came from?"

"I guess."  I said a little frightened.

On the way back I wanted to find my old secret spot.  I told Su-Lee that we were taking a slight detour and decided that we would take a hike deep in the forest.  I made a stop on the side of the road and thought I recognized the markings where Ivan found me.  I actually thought I was lost but then Su-Lee pointed in a certain direction, she said the wind whispered something in her ear.  We decided to go with it and then we found the place.

What I had discovered so long ago was the actual tomb of Dr. Martin Luther King Jr., and I found his name inscribed which was what fascinated me.  I told Su-Lee that I chose the name King after finding this place.  She then asked me what my real name was and I told her.  It was Theresa.

"I love you, Mother Theresa."  Said Su-Lee in a soft, gentle little voice.  So I gave her a big warm hug and said, "I love you too."

Then he headed back home to Beach Town.  I was glad I was able to take this trip with my my new daughter so we could bond.  But I was even happier to be going home.  I felt a sudden realization that my life had a purpose, I ran away for a reason, to carry out a mission for life.  If I did not do what I did then Su-Lee would not have a mother, my mother would not have had a daughter and Ninja would not have lived.  Then I felt my heart swell up with love and pride.  It was true, my heart was on a spiritual purpose which is larger then my own life, my heart with spiritual horns.