I felt comforted knowing that I had someone or something watching over me.  What Nami told me made sense but I had a question for her.  I often heard some of the people talking about God and then I heard from Nami about our Great Mother being Mother Earth.  So I asked her how these two relate to one another.  She said, "King, we can not have a mother without a father and we can not have a father without a mother.  For a very long time men were trying to assert themselves over women because they thought God was like a man.  But with men's great strength came their abuse, they abused women trying to make them into submissive servants.  They made women believe that they were inferior and at fault for mankind's problems.  Of course that's not true.  So women started to rise, they started to rebel against men while gaining strength and power, forcing men back in their place.  Women wanted men to recognize the fact that we all live together side by side, no one is above the other.  While men are protectors having physical strength, women are teachers and healers and peacemakers, having more of a mental strength.  Each one is to use their gifts to benefit all of humanity.  Humanity is the child of our Great Mother Earth. 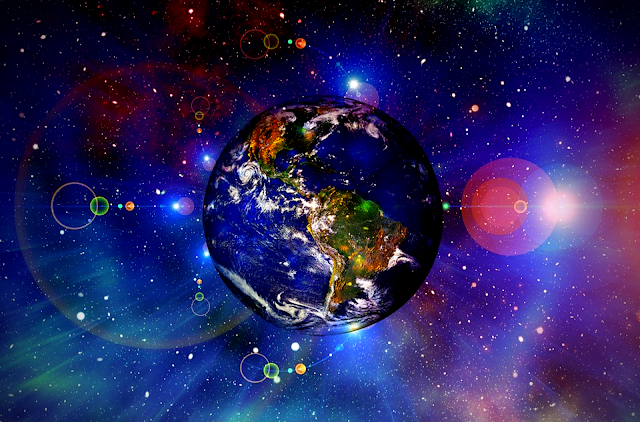 This is her home and we are here to take care of our home while keeping it clean.  If she were to die then we would die with her.  But there is also a great cosmic love that most people do not recognize and that is the love between Great Mother Earth and Father God Spirit of the Sun.  Father God Spirit of the Sun will not allow mankind to destroy the Mother of their children.  As one gives birth the other is a guiding light.  As one nurtures the other gives strength.  It is important for you, King, to recognize both and give them an equal share in your life.  Our Great Mother Earth gave birth to you, is teaching you, healing you and helping you to live off of her lands.  Father God Spirit is giving you light and direction to grow, guiding you on this great journey.  Both are our loving parents."

For awhile I had to think about what Nami told me.  She made me realize that even though my birth parents were lost to me, I still had the Great Mother and Father Spirit who love me more.  Nami told me that I would not have been born into this world without a special purpose.  She said we were all born for a reason and the only way I would know that reason would be when I matured into adulthood.

"We go through the trials of life first." said Nami.  "In a way, we suffer a right of passage, nothing is given freely.  We all must suffer in order to receive the treasures of life.  Your capture added fuel to your angry fire, yes.  But now think of how your anger can be used in a different manner.  Mix it with the love you have and it will become passion for your future.  We have unfinished business with this General.  Your life has been infected with him for a reason.  You must realize that he is in the path of your fate."

I then felt my mind twist into a new dimension, as a fighter, a warrior for the people.

This General has twisted his power and abused his position.  I felt it my duty to stop him.  Something had to be done before it was too late.

Being in the forest changed me, not only did it heal my angry heart but I could feel my soul grow.  It wasn't long before Nami decided that it was time to go back home.