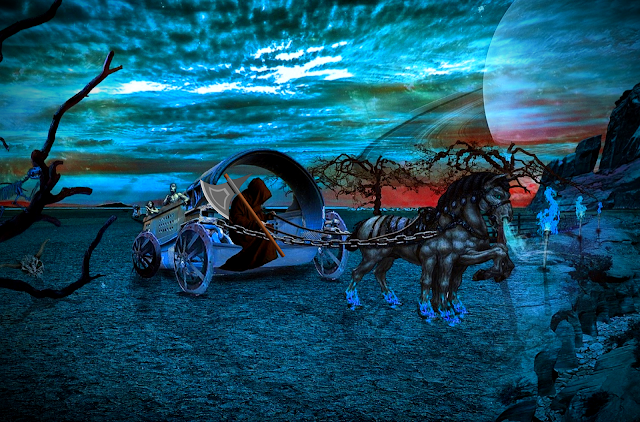 "Trekking through a golden glow of heat-filled desert forested by dried-up trees, small shrubs and rocks, we entered the sights of enemy lines.  While perched on her mechanical steed King stopped on top of a high sand dune and waited for her brother, Zi-Yen and Nightwind.  She detected a pocket of weakness in the enemy line and pointed to it.  Zi-Yen could also detect the dense line and sent out the word that the time for battle has come.  With his signal came Nightwind's warrior charge like a disease quick to spread fueled with a drugged insanity.  But King was to wait, the wind blowing against her beautiful face, her jet black warrior hair flapping about her shoulders.  She watched with her golden-green eyes as her warriors disappeared in a brownish cloud of unstoppable rage.  The chaos down below was entangled with limbs and bodies as they twisted with painful turmoil.  Then I saw a glowing apparition surrounding your mother, as if the magic within her was ready to strike.
She's not an ordinary woman.  King was understood to be a mighty warrior evolved to further employ a woman's dynamics with a multi-faceted comprehension, with a sense of control over her hypersensitivities and intuition, all powered by a dominating spirit.  Your mother has the energy of no fear.
With one glance at her brother, Zi-Yen gave her a nod which sent her flying, just like an arrow strait into the rage's core.  As if there was some angry joy roping around her mind she smiled at the enemy since they were unaware of the demonics of her game.  Then as soon as she entered the rage more of our warriors raced in a collided with the opposing force, smoothing her way to the General.  She knew she had to end his evil tyranny, his abuse of the people, his hatred upon women, his hold on you, our son.  She was angry and frustrated because she had to deal with this carelessness that somehow this world created.
As she moved in on the General's location she transformed into a death march with an axe in hand, no force could stop because they were all on her side.  She said to the General that if Mother brought you into this world, then Mother can take you out.  He just laughed and met her on the battle field, severely underestimating her size and ability to move around him quickly.
The next thing that happened, King hacked the General's head off and held it up for all to see.  Zi-Yen had an eye on his sister the entire time while I waited with him.  He knew he could not go in between King and her duty.  Once the General's men saw that he was dead they stopped fighting.  Then Zi-Yen told me to go get King and then to find and free you."

The Commander looked over at his son, Michael, the two sitting by the blaze of a fire in the middle of the night.  Michael's eyes were fixated on the fire imagining the battle scene his father just told him.

"So when do we free the people of Tech City?"  Asked Michael as he nodded in the direction of the glow emanating from Tech City.  Then the Commander looked in the same direction, "The time will come, trust me on that one, their time will come."