Terror struck the town as a new family arrived followed by the news that Exiles were chasing them down.  I saw Mother Matriarch shudder as if a chill went through her spine.  She immediately sent word for everyone to be on their guard.  I overheard someone talking about Tech City's Exiles chasing Mother , Nami and some others as they traveled to this site many cycles ago.  Exiles tried to rob Nami's family, killing her husband and son in the process since they were in the very back of the travelling line.  Mother Matriarch was at the head of the line when she heard the attack.  She raced to defend Nami's family and was able to kill-off two our of the three Exiles, saving Nami from death.

Zi-Yen gave the first order that I was to stand the first watch with Ninja om the outskirts, towards the direction in which the new family came from.  Hidden among the brush of the forest I could smell a strange scent in the air.  while Ninja stiffened in a guard-like pose, his ears alert to something in the distance as if he heard something.  I became very still and kept watch in the direction Ninja was facing.  Then I heard a noise too.  Ninja and I held our position feeling the air for vibrations of sound, we were ready to attack.  Then a large brown and white deer with antlers as wide as I could reach came into our sight.  I relaxed a little but Ninja just sat there tracking the deer's movements.

In the course of my mind wondering I did not see that Ninja was tracking something else in the forest.  Then I heard a twig snap and I immediately sat up.  Ninja was locked in position in the direction of the noise and together we stayed motionless, hidden by the brush, as still as a tree.  It was not a deer this time.  Creeping slowly from behind the trees in the far off distance was a group of three males, one old man and two young boys.

I knew I could beat them with Ninja as I slowly motioned into position, waiting for them to get closer.  Then with a blow on his ear Ninja charged, he instinctively knew what to do as he bolted from behind the brush and jumped on the bigger old man.  Before the other two boys could realize what was going on I came out and bashed one on the neck with a thick tree branch and bashed the other across his chest knocking the wind out of him.  When they finally got a look at me their eyes widened with amazement, scared by my appearance.  My hair was black and I had black striped all over my body.  They both tried to come at me but I grabbed my knife attached to my side and gave them a hard, cold look.  Thoughts of Nami's family racing through my mind. 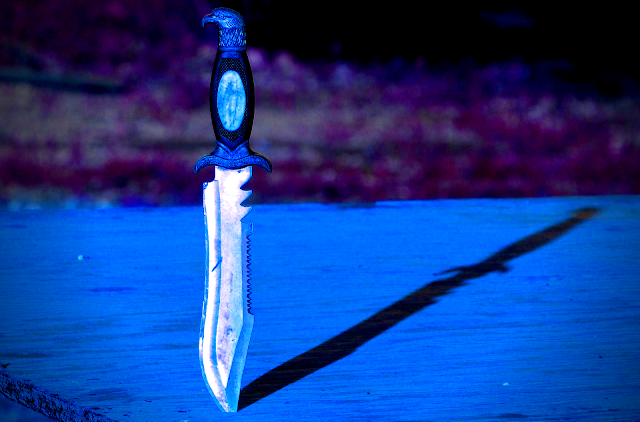 "Leave and never come back,"  I told them.  They didn't move at first.  But when they saw Ninja's bloody mouth as he came to be by my side, they took off running in the direction they came.

The man that Ninja attacked was in pain.  He tried calling after the boys for help but they ignored him.  When he looked at me he started whimpering, as if he was weak.  Then all of a sudden he leaped at me with anger.  But I was quick to move slashing his throat instinctively.

Zi-Yen came flying through the trees and started beating the man in a furious explosion not realizing that the man was bleeding to the death.  Then as he saw the blood gushing from the dying man's throat he backed away, watching the man fall to his knees.  We both stood there, trapped in a daze of the moment, not knowing what to do.

There was a private meeting between Mother Matriarch, Nami and all the elders of the community to decide what to do next.  It was decided that the town would move south.  I asked Mother why and she said, "These Exiles from Tech City keep endangering our people and it seems they are growing in numbers.  It's going to be safer if we move and this was a sign that we need to do it!"