To clean is to care, that was the thought echoing in my mind as I told this to Nami after a few days had passed.  "Good, you can think.  There is something in that head of yours.  Come..." as she hobbled to her table of trinkets (I notice that had a slight limp), "I have something to tell you."  She picked up the book of Dr. Martin Luther King Jr., looked at it then put it back down, "Our world has changed so drastically from when I was a child.  But we will have a history lesson later.  You are being schooled, yes?  It was not by chance that you made your way here.  Rather, it was by a higher power's choice.  You come across a secret site before Ivan brought you here, I know.  Ivan told your  Mother where he picked you up."

"No my child," as she smiled and almost laughed with amusement.

"You named yourself King for a reason, but too young to understand.  Remember, true strength is of the mind and we are here to cultivate your mind.  So as you learn about the first mighty warrior named King remember not just his name, but take in his fighting spirit and know what it was he was fighting for.  You, lil' Ki, will one day have to fight for the people.  Keep this in your memory and you will not fail."  She pointed a long, soft finger right at my heart and I felt it pound hard.

Then she continued with her story, "A long long time ago before any of this mess, when Ivan, your Mother and I were very young, we found ourselves together in a shelter for women and children.  In that shelter we all became friends and understood the nature of our circumstances, our mothers had suffered abuse in some way.  The three of us became close as we called ourselves 'Children of the Abused.'  But then it was time for us to leave with our mothers and go our separate ways.  We never forgot our shared experience.  Then much much later, survivors of war and life threatening diseases, we found ourselves crossing paths again.  There were more survivors and soon this town was formed, we started new.  But that is all I will tell you for now."  I noticed that her eyes were glazed over as if some emotion darkened her spirit.  She waved me off to leave her alone.

"And did she tell you of my anger?" was the response that came from Mother Matriarch as I questioned her about the shelter for women.  When I said no she decided to tell me a tale of her own, "Yes my mother suffered abuse.  She was abused as a child by my grandfather.  His anger became a part of her life and it came down to me.  Unlike whom I am now, back then I was and angry little child always getting into fights and throwing temper tantrums, I was very unhappy.  As I grew up I realized that I needed to change, I wanted to take charge so I became a fighter for my own happiness!  But the thing I had to fight the most was my self in my own mind and those negative thoughts that tried to take over." 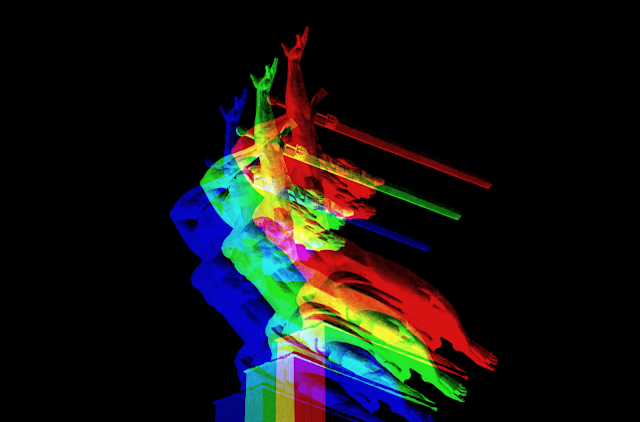 She said, "Well, I had to picture in my mind a dark figure full of hate.  I then pictured myself armed with a mighty sword and I began hacking and cutting that dark figure down to a small size.  I had it in my mind that I would win and I imagined that dark figure getting smaller and weaker.  I yelled at it over and over, 'You have no power!  You have no power over me!'  Then as it got smaller and weaker I laughed at it and flicked it away as if it was a tiny spec with no reason to be in my life.  I then told it, 'You are no more, you are gone, you are dead.  You have no power over me.'  I screamed out loud, 'I REFUSE TO THINK NEGATIVE THOUGHTS!  I refuse to be negative!'  I did this almost everyday for a very long time.  I had to practice this kind of battle before this thinking became automatic.  That is why we practice everything, we practice to get better.  I then proved to myself that I could take charge of my own life and change my anger into passion.  I figured out how to use my fighting skills for the right reasons, teaching other so that they could live and be happy with themselves and among other people.  It's all in the mind.  Practice first: picture it, imagine yourself winning, and do this everyday.  If you have it in your mind that you will not lose, then you will not lose!"

After listening to her words I felt empower that I could do anything.  I was told by Nami that I was somebody special and I believed her.  I finally understood the need for practice and welcomed the training my brother Zi-Yen would introduce to me.