Now I see the Zindin Warriors and Exile Warriors uniting into one clan.  It seems our meshing is slowly transforming our entire society, but in a good way.  We are becoming strong!  Now we are prepared to fight and protect ourselves against the General.  Nami said it was because of our love and acceptance. 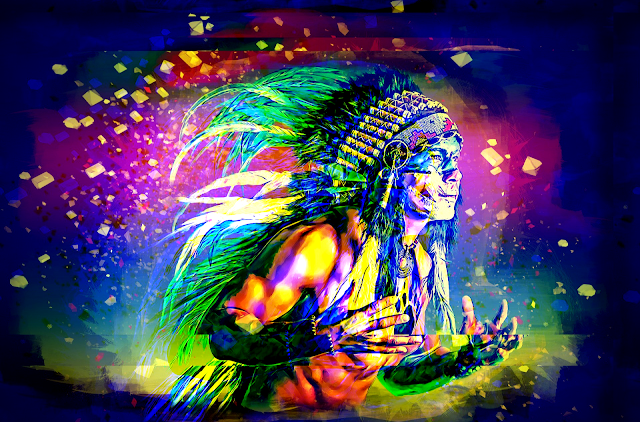 For some reason I felt compelled to ask Nami about the Great Mother.  She looked at me carefully and wondered for a bit.  It seemed she wasn't sure how to tell me.  Then she said, "The Great Mother is who we are living on, she is the great Mother Earth and we are her babies."  She said that out of all life on the planet, people were the youngest, "Because we are so young we are still learning how to live.  We have yet to figure out how to live with each other."

Then I asked her about the spirits of the land.  She said, "Once this land was inhabited by a peaceful people who lived in harmony with it.  Then, as ruthless men from another country saw the freedom and spirit of the land they decided to steal it, taking it for their own pleasure.  Entire tribes of people killed, senseless slaughters over desire for land!  The blood splattered changed everything, the land became angry.  Now is a time for justice as the Great Mother is sending out spirit protectors.  These spirit protectors are coming through in you children and the old way of life is coming back, to  reclaim their land that was once stolen.  It's an ancient tribal way of life."

"I wonder what happened to Latina Rey's town?" I asked, "The people there looked so sad.  I want to go back when I get older."

"I'm sure you will.  Now that you are getting older I think it's time you learn how the first warrior named King became a champion."  Then Nami handed me his book and I found a quiet spot to read his words.

As I read the first page I noticed that he and his dad were first named Michael (I think I will name my son Michael).  I noticed he was a man deeply devoted to his God and that it was through his faith that gave him the power to help his people.  He was a fighter through his mind.

It was also through love that King was able to fight.  Now I understand what Mother was trying to tell me.  If I picture the hate in my mind and then fight it with my sword of love and passion then I can win any battle and fight for all people.

I remember one time Mother was called to settle a dispute between an Exile and one of her own men during the assimilation.  They were so angry and furious with one another that they wanted to kill each other.  But as soon as Mother made her way to the men it seemed as if they settled down.  She had them separate and then she talked to each one individually.  Other men wanted to jump in but Mother said that they would only add to their anger, more men causing more problems since they were natural fighters.  But women were different in this community; we don't like to fight and would not try to start a fight.  So after Mother spoke with each one, the men came back together and talked more peacefully in a civilized manner and Mother was there the entire time as a sort of mediator.  If ever two men got into a heated argument they were to call Mother Matriarch or another woman of high ranking to mediate them.  That became a new guideline for our community.

I wonder about how the Brigadier General Justice wants to fight with Mother Matriarch.  Why is he resorting to physical violence?  Why is he so mad that he can't talk about it with her?  Would he give peace a chance?  Would he be willing to sit down with Mother and try to come up with some resolution?  Have they ever tried a peace talk?