When we reached the edge of different sand dunes Mother told us that we were close to our final destination.  But us kids just rolled our eyes and dragged our feet  because we knew of the last sand dunes we had to cross.  To our surprise it only took half a day before we heard a chaos that renewed our curiosity and quickened our pace.  We became excited at the sounds yet careful with our approaching steps since we did not know if those sounds were good or bad.

Then as if the roars seemed like they would be over the next sand dune Mother had us wait while she carefully crept slowly ahead.  Then we saw her crawl on her belly and peer over a sandy hill, hidden by some dried shrubs.  After a moment she waved for us to come to her.  We crawled on our bellies and then peered over the hill and saw a chaotic mesh down below.

It was a metallic mesh of machines, people on blue ones, people on white ones similar to Ivan's and the machines we rode on the way here.  They were all riding in big circles, some side by side while others watched on the side with groups jumping over small sand hills with four-wheeled motor-machines.  I never saw anything like it in all my life.  I could feel myself drawn to it's pit, dazzled by the site of strength and power.

Mother said, "Let's just wait and see what happens.  Something is telling me to be on my guard." 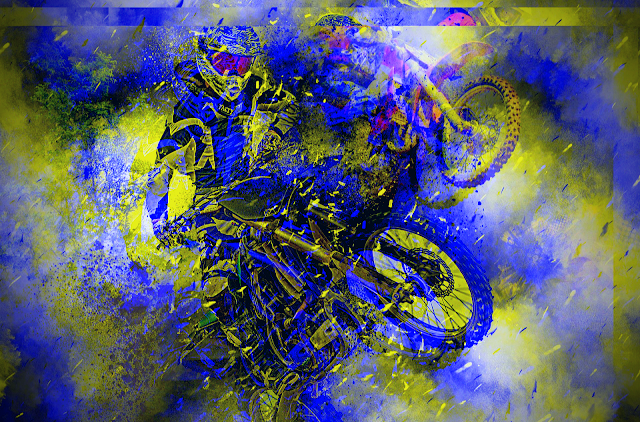 Then just as she was telling us to wait a band of hostile Exiles came up through the sand on their mini-machines, howling and barking like a pack of wild dogs, disrupting the groups into violence.  I could see that they were not part of the group down below.  Then the Exiles took off just as quickly as they came.

Mother took us down the hill and asked some of the people where their leader was.  As we arrived at the pointed spot we entered into a large dome and heard a voice bellow out, "Well if it isn't the Mother Matriarch herself, and she brings children!"  It was a deep sarcastic voice coming from an aging man idly sitting in a thrown-like position surrounded by similar looking men and women.  He was called Brigadier General Justice.

"Mother replied, "I see you have done very well for yourself, General."
"You can say that.  I haven't heard any complaints yet."
"And what about those Exiles I just saw?"
"Oh it's nothing, nothing, some warning perhaps.  Who cares?" he said with a laugh.
"I see." said Mother

"Why are you back?" asked the General.
"I was wondering if you could help an old friend?"
"HAH!  Me help you?"  After all these years you think you can just waltz in here and get my help?"  He started to laugh and then the rest of his people started to join in with the laughing.  He interrupted, "Did you forget the last time we saw each other?"

"Stuff it, General." said Mother as she stared at him with a cold, hard, furious glare.  Something in him backed down and then he asked, "Help us with these Exiles?"

"Allow me and my children to stay here under your protection and then I will come up with a plan that will help get rid of these Exiles.  Also, I need some of your best men."

"You were always the best general in my Army."

"I still am." Mother said with a demonic smile then she moved to go outside while we followed.

We were shown a place to make camp and after we were done setting up Mother sat us down and said, "You all must stay together.  Zi-Yen and Nightwind, you are the guards who protect King and Latina Rey.  King, you keep watch of what is going on, be aware of these surroundings and watch out for anything weird or what gives you a funny feeling in your stomach.  Ninja will keep you all safe.  This is your first assignment as a team, to see how well you can all work together.  You can do this!  Soon we will make our way back home."  She told us to stay in our little camp while she went out to make plans with the General and his men.

Everyone knew something big was about to happen as all the people prepared for a fight.  Our Mother Matriarch was at the center of it all aiding Brigadier General Justice.  He gave her exclusive command over his men for an upcoming battle with the Exiles.  Mother wanted us to stay in our tent but sometimes we would peak outside to see what all the fuss was about.  I saw her change from a loving, nurturing woman to a commanding, fearless leader.  It was then that I saw myself becoming just like her.  She was the core and everyone listened to her.

When that day of the battle arrived I saw the entire land shift; a protective circle was formed around all the fabric dwellings and tiny huts with metal blockades to protect them.  Then I saw Mother as I have never seen her before, she completely transformed herself into a mighty warrior which sparked the ideas of Zi-Yen, her hair was black as coal and her face was striped black.  She carried several sharp looking weapons around her waist and a large one on her back.

In a rush she was off, telling us to hold tight, that she would be right back.  We peeked out of the tent and saw her get on the back of a motor-machine with a man who looked the same.  When they raced off into the distance we could see them joining others in a swarm going over the golden dunes.  We could hear the fading sounds of the machines.  Then all was silent.

After a few hours went by we were getting restless.  I was anxious and wanted to know what was going on.  Zi-Yen knew that I wanted to go outside but he wouldn't let me, "Mother told us to stay here, King."  Then on instinct Little Latina Rey grabbed hold of me, not wanting to let go.  So I reluctantly sat back down giving Latina Rey a big hug.  We got tired of waiting.

Nightwind heard a commotion coming from outside and thought the Exiles were coming for us.  We poked our heads out to see exactly what it was.  It was Mother!  She appeared right before our eyes and yelled for us to get in the four-wheeled craft she was driving.  All of us kids quickly piled in, unaware of the chaotic mess rising behind us. 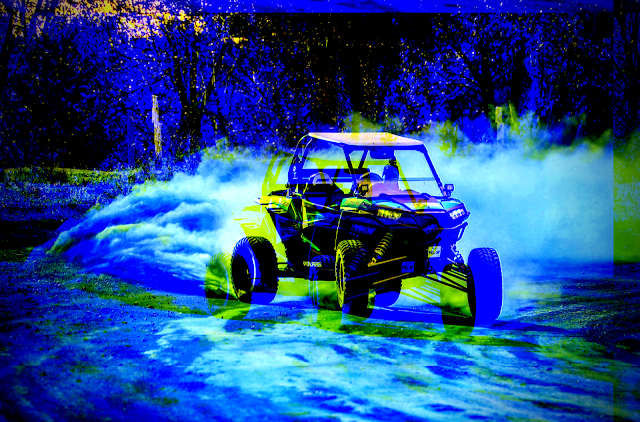 What really happened that day we would never know.  Mother just kept driving until the sun set.  When we finally got back to Beach Town everyone ran up to us, happy to see that we made it back safe and sound.  Then Timothy poked out his head from behind the crowd and started to inspect our new machine,"Hey, I know this type.  Got tons of it in my yard that I like to fiddle around with."

Zi-Yen asked, "Do you think you can make more from what you see here?"

"I might, especially since you got one that works."

Mother jumped in, "But first we need to rest.  Maybe tomorrow you kids can go check it out.  Alright?"

We took Little Latina Rey to her new home and Zi-Yen made a space for her to sleep.  Now there was four of us.  We took Latina Rey to the beach and we played in the water with Ninja.  Then when night came we went to bed.  It was hard to talk to Latina Rey since she did not understand our language.  But Mother found another person in our town that did speak her language which made the transition for Latina Rey a little easier.