It was a still night as we entered in the red eerie glow that surrounded the town.  Mother warned us to stay together since she did not know what kind of place it was.  I noticed that the reddish buildings were the same color as the dirt on the ground., like they were made of the dirt.  Then as we walked in the streets people would come out of the doorways and stare at us.  I saw that they were wearing shabby clothes falling apart.  I could feel their sadness calling out to me, longing for help.  Their somber eyes depressed my mind, as if I fell into a trap.  I had to hide behind Mother since I could not bear to look at them.  Zi-Yen and Nightwind huddled closer to Mother and I, Ninja right by my side. 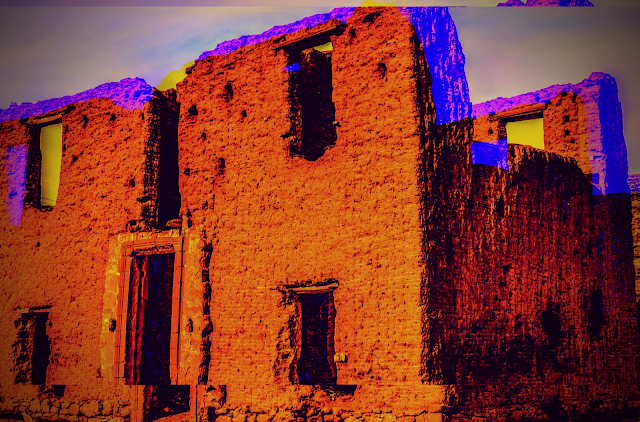 "There's something wrong here," Mother said, "but I'm not sure what it is."
"Zi Yen said, "They look so sad, as if they have no hope."
"They are a poor people.  The spirit has fled these parts." said Nightwind.
"I don't want to stay here." I told Mother.

"No, we will not stay here.  But we must get through it."  Mother pressed on.

It was like a maze as we fought our way through, trying to reach the end.  Then all of a sudden Mother stopped us dead in our tracks, she was listening for something, "Follow me," she said as we turned a corner.  Then I heard an awful sound of a little girl, screams of being terrorized.  We began to run as Mother rushed towards the screams coming from inside a darkened dwelling.  Like a huntress on the prowl, Mother caught hold of a scent and she would not let go of it.  She kicked at a door and there we saw a man whipping a little brown-haired girl in the corner.  Mother didn't care if she wasn't allowed to enter.

We watched her grab the belt from the man and then furiously she began to beat the man back, away from the girl.  She commanded us to get the little girl and go back to the street we were on.  Then as Mother ran to catch up with us, she picked the little girl up into her arms, and made her way out of there as we followed.  It seemed none of the people cared since no one tried to stop or follow us.  We almost got lost but then we reached a clearing on the other side of the town.  Mother slowed down but she would not stop, she seemed caught in an emotion and it took some time for her to finally wear down.  Once she felt it was safe enough, she slowed down to a walk.

"Did you see what that man did?" Mother asked us.  All we could do was nod our heads still stupefied by the frightful scene.

"If ever any of you hear a screaming child and come across a scene like that, you do exactly as I did, you rush to the aid of that child!  No one deserves to be beaten like that."

A small voice came from up the tear-faced little girl, "Gracias."

We made camp that night as Mother took the little girl aside and talked to her in private.  The rest of us were still shaking, scared by the awful screaming.

"I don't know how people actually live that way." said Nightwind.
Zi-Yen replied, "I wonder what happened to them?"
I said nothing.  I was not prepared to see such sad eyes and I began to feel sorry for those people.

"Did you see how no one tried to chase us?" said Nightwind.
"It's like they did not care." said Zi-Yen.

"Here's a question: would you have done the same thing as Mother?" asked Nightwind.
"I don't know," replied Zi-Yen, "I just don't know."

We all laid there, staring up into the stars.  I wondered about that brown town, it was another mystery and I wanted to know more.  I wanted to understand and I wanted to go back one day when I got older.  Soon we all drifted to sleep.

I almost forgot what happened when I woke up the next morning but then I realized that we had a new member, Mother had a new child.  We welcomed her into our circle as we gave her big warm hugs.

"She can't speak our language yet, she only speaks Spanish." said Mother.
"I will help her." I said.

Little Latina Rey was a sweet girl who found hope during our journey.  She was a little scared of the boys but she seemed to take a liking to me and Ninja.  Sometimes I would give her a piggy-back ride when she was tired and sometimes I would let her ride on Ninja.  At night she did not want to sleep by herself so she either slept with me or Mother.  I could feel myself becoming very protective over her since she was now my little sister.  Even Ninja followed closely by her side as if he knew how small and gentle of a spirit she really was.